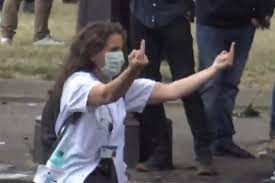 The woman, who had previously worked as a nurse, is preparing for a political career. She gained notoriety for attacking the police and hurling stones at them at a demonstration two years ago. She was fined for her actions. According to one of her fellow party members, there is nothing wrong with fighting for better working conditions with these methods. In a radio programme, he tried to depict the woman as the victim.

Following the resignation of BLM activist Taha Bouhafs, who was accused of sexual assault, the French left-wing coalition has now come up with another anti-police candidate, Farida Chikh, a nurse who attacked police officers, gave them the finger and threw stones at them in June 2020. Healthcare workers initially started protesting against unworthy working conditions during the pandemic, but the demonstration erupted into riots and angry protesters turned on police.

At first, the press only published footage of the woman’s arrest, in which she is heard telling police she was a health worker and then asking for her asthma inhaler. Many were outraged at the violence against the woman, as the first pictures published showed the police taking away a woman in her fifties with a bleeding head.

After the full video of her arrest was released, Farida Chikh was seen as the perpetrator rather than the victim, and had to appear in court for assaulting police officers. She received a fine of 300 euros which she had to pay to two police officers, but she was not charged with any crime, so she has a clear criminal record. Ms Chikh defended herself at the court hearing by saying that she was not aiming the stones at the officers; the act merely symbolised her desperation and exhaustion.

The latest news about her is that she is about to make her debut in politics, under the Left’s colours, BFMTV reported. The Unbowed France (La France Insoumise) party’s Mathilde Panot announced on Twitter that she will stand in the parliamentary elections in June in the Val-de-Marne department, neighbouring Paris, and named Farida Chikh as her deputy.

Several French police unions have commented on the news. Unbowed France has a simple way of appointing MPs, the more they hate the police, the more likely they are to be selected by the leftist party, SCSI tweeted in ironic tone.

Immediately after the announcement of the nurse’s political ambitions, the explanations began, with Manuel Bompard of the Unbowed France party trying to portray the nurse as a victim of police brutality, saying that she was dragged on the ground by police officers. The reporter pointed out to the politician that it was Farida Chikh who attacked first, as she was the one who hurled stones at the police, which justified her arrest. Mr Bompard defended the nurse, saying that the atmosphere at the demonstration was extremely tense, with the protesting health workers exhausted and desperate because of the extreme pressure they had been under during the first wave of coronavirus. The politician admitted that Ms Chikh had a burst of fury during the protest, but added that he was personally proud of the people who were fighting for better working conditions. As the reporter summarised:

The politician does not think it a concern that people express their anger through violence against police officers,

as this is what happened in the case of Faride Chikh.

French police union Synergie-Officiers commented on Twitter that the politician’s attitude glorifies violence against the police in all its forms.