While several EU member states have seen brutal increases in utility fees over the past year, only has introduced a comprehensive measure to reduce the burden on the population, the Hungarian Origo news portal points out. The price of natural gas and electricity have doubled in several countries, with other countries where people are charged four to five times more for those.

Utility costs rose in all EU countries except Hungary this year until April, with many going through extreme hikes mainly due to higher oil and gas prices. These raw materials were already much more expensive at the end of last year than in the previous period, and the uncertainty surrounding the war in Ukraine – such as a possible embargo on Russian energy sources – has made natural gas and oil even more expensive, Origo recalls.

People are paying up to several times the previous price for gas heating or electricity across Europe, and the price of heating oil has also risen significantly. However, a comprehensive help similar to the utility bill cuts introduced in Hungary ten years ago has not been implemented in any other EU country.

On average, 26 EU countries saw their energy fees rise by more than one third, 35.2 per cent, with Latvia, for example, experiencing a 335 per cent surge. Household utility fees in France, which has traditionally placed great emphasis of social and welfare measures, are forecast to rise by an average of 14 per cent this year. People will have to dig deeper into their pockets to pay their bills in many other Western European countries.

Overheads rose by 45 per cent in Ireland, by 41 per cent in Luxembourg and by almost 26 per cent in Belgium. The Netherlands saw seen an even higher increase at 86 per cent. The burden on households is also much higher than before in the Baltic states. Monthly utility fees In Estonia in April this year cost nearly 60 per cent more on average than a year earlier. The same figure is 37.9 per cent in Lithuania, with a staggering 335 per cent increase in Latvia.

Also worth mentioning are the Czech Republic in the Central European region and Italy in the Mediterranean region, with utility costs rising by 18 per cent in the V4 country and 28 per cent in the latter one. Household utility fees have risen by 65 per cent on average in Romania, one of the poorest countries in the EU.

The price hikes of items making up utility fees are also interesting to look at, as they can cause significant additional financial burdens for large social groups. Such items are property rental fees, which rose by 32 per cent in Latvia and 34.4 per cent in Estonia. The rent has also increased significantly in Slovenia, Portugal and Poland, with rises of 24, 19 and 11 per cent respectively.

Figures are also shockingly high when we look at the price hikes of natural gas sold to households in various countries.

The cost of that has increased the most for Latvians, where it is nearly five and a half times higher than a year earlier. In Croatia, the increase was 270 per cent until April this year. There are, however, several other countries where prices have more than tripled. In Belgium and Estonia, the price of natural gas has risen by 230 and 237 per cent respectively, while in Greece it has more than doubled in a year. In Romania, gas prices have quadrupled at some suppliers. 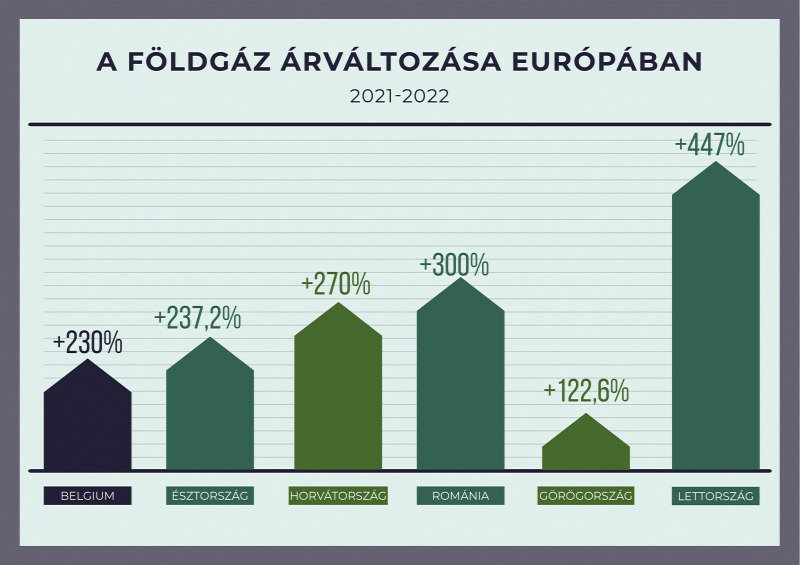 Electricity prices are also skyrocketing in many member states. The cost of household electricity has increased three and a half times in Lithuania and nearly four times in Latvia, while Estonian consumers have seen a 119 per cent rise. In Belgium and Spain, electricity bills doubled on average, whereas they rose by more than 131 per cent in Italy. In Sweden, where the majority of households use electricity for heating, the increase was 32.4 per cent.

Citizens in several EU countries will also have to pay much more for heating oil than last year; in Austria, for example, it costs 118.5 per cent more in Austria than a year ago. Residents in Germany, Finland, Greece, Ireland and Luxembourg are also seeing significant price hikes, with fees in these countries rising by between 65 and 90 per cent.