A demonstration by a few hundred people, organised by the Hungarian Left against the amendment of a tax law for small businesses, has turned into a public disturbance.

The demonstration, originally designed to protest a change to the law on the Itemised Tax on Small Businesses (the KATA scheme), began losing its peaceful nature after 10:30 pm on Thursday.

After some of the few hundred demonstrators left, certain groups of the remaining hard-line protesters engaged in an increasingly loud argument with police at the Erzsebet bridge in Budapest, Hungary. A drunk woman, removed from the crowd by police for drawing a graffiti, resisted police action and even hit an officer, which made some protestors even more feisty. 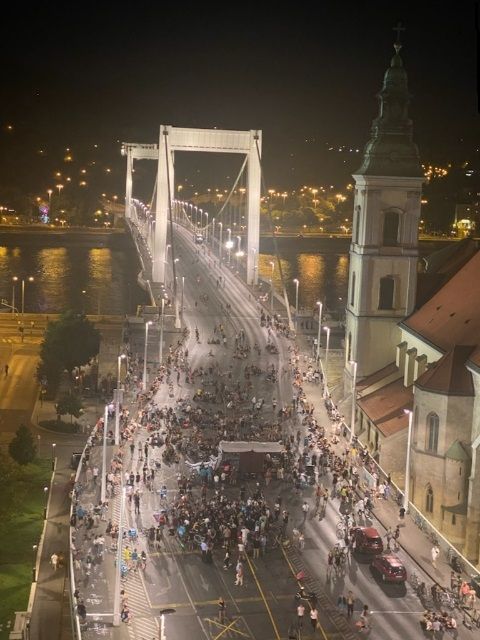 The protesters allegedly started to quarrel with police over the method of the woman’s detention. They tried to prevent the police van from taking her away.

an unidentified person threw a bag of beer bottles and cans on a police car from the bridge.

Police also detained a man at the rally for violating the freedom of association and assembly. He took part in the demonstration with his face covered with a scarf and used a can of paint to spray-paint the asphalt. The officers attempted to detain others for similar incidents, with some from the crowd urging protesters not to sign any documents under the current circumstances.

This is not the first such disturbance in recent days. Police filed a report against three people who were obstructing traffic on foot and mounted on bicycles at the intersection of two busy downtown streets. There was a more serious incident, too, when

a man hit a policeman in the head with a chain at the Buda end of the Elizabeth bridge.

The protests, encouraged by the leftist parties, began on Tuesday. On Thursday, the satirical Two-Tailed Dog Party (MKKP) announced a stunt dubbed “overtime on the bridge,” which meant the blocking of the Elizabeth Bridge. Eventually, the demonstration was spearheaded by Peter Marki-Zay, the left wing’s failed prime ministerial candidate who, among other things, kept insulting the voters of the ruling Fidesz party, calling them “idiots.” On the preceding two days, Tuesday and Wednesday, the street protests were organised by the leftist opposition Momentum party.

MKKP chair Gergely Kovacs announced that they are mulling the idea of a long-term “picnic.” “From now on, the bridge is ours every night,” Mr Kovacs said. The party leader was detained by police on Wednesday after they found some drugs on him which he had admittedly used.

In 2012, when the simplified KATA tax scheme was introduced for small businesses, none of the leftist politicians now protesting its amendment approved it in parliament.