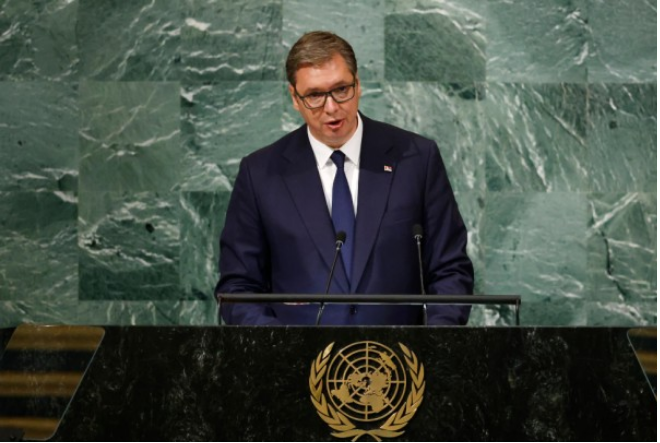 Vucic: Great powers only pursue their own goals; war in Ukraine being first to erupt after WWII not true

In 1999, NATO attacked Serbia, and the West recognised Kosovo's independence after the intervention. Now everyone has lined up in support of Ukraine's territorial integrity, but this principle does not apply to Serbia's case. These are some of the issues Aleksandar Vucic spoke about at the UN General Assembly, and also described the 5 key challenges the world is currently facing.

World peace has been undermined to an extent that has not been seen since World War II, the Serbian president told the UN General Assembly. In his address, Aleksandar Vucic stressed that we are all witnessing that a complexity of geopolitical situation prevails across the world, and the global challenges we are facing are threatening to radically change the international security architecture and to jeopardise the established international legal order. Such complex times demand much wisdom and unity in order to preserve peace, Serbia’s president added.

The president of the Republic of Serbia summed up in 5 points what he sees as challenges facing the world. These five points by Mr Vucic include: returning to peace; preserving the territorial integrity of internationally recognised states; tackling energy security; ensuring financial safety of poor and developing countries; and ensuring food supply.

Current global developments remind us that the principle of peaceful resolution of disputes has no alternative, Serbia’s head of state said, underlining that Serbia supports the territorial integrity of all UN member states, including Ukraine.

“We could hear many people say that the aggression against Ukraine was the first conflict on European soil after World War II. But the truth, that the territorial integrity of a country in Europe, Serbia, as a matter of fact, which did not attack any other sovereign country, was violated and is constantly left unspoken. I ask from my interlocutors, leaders of many countries for years – what is the difference between the sovereignty and territorial integrity of Ukraine and the territorial integrity of Serbia, which was grossly violated, and for which you provided international recognition and legitimacy?” Serbia’s president asked in New York in connection with Kosovo, adding that nobody has ever provided a rational answer to the question.

Speaking about the relationship between Belgrade and Pristina, Aleksandar Vucic emphasised that they are patiently and amicably looking for a compromise solution through the EU’s mediation.

“This is a difficult process that been going on for more than 10 years. But, we see no other alternative. It is better to negotiate for 100 years than to wage war for even a single day. I hope that we will reach a mutually acceptable solution based on compromise, because this is absolutely the only way to reach our goal which is a long-lasting peace as a prerequisite of prosperous life for Serbs and Albanians in our entire region,” Serbia’s president has said.

Addressing the energy crisis, the resulting financial problems and the food shortage, Mr Vucic said the world needs solidarity, to a far greater extent than what we witnessed during the pandemic.

“The developments are highly alarming, and the reality is such that all of us, without exception, are struck by them. Food supply security will have a devastating effect on Africa,” Aleksandar Vucic said.

The Serbian president underlined: the increase in food prices was an additional problem, so it is the task of all of us to find working and effective solutions that are good for everyone.