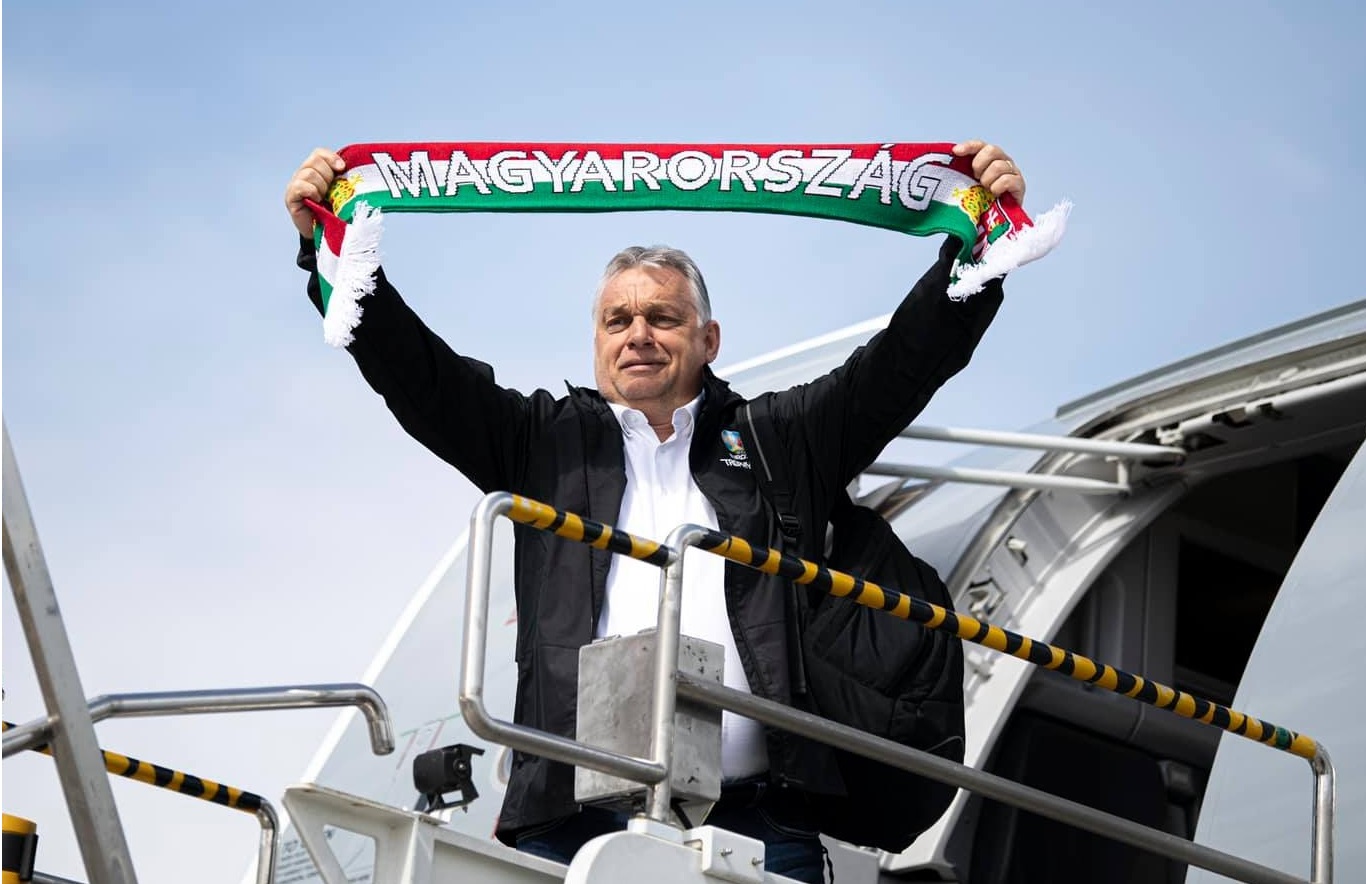 PM Orban: Hungary is among the most competitive nations

Even before the start of this year's Olympic Games, Hungarian Prime Minister Viktor Orban talked about waking up to watch the competitions at night, holding true to his widely known strong affinity for sports. After the Hungarian Olympic Committee and the leaders of most sport branches had already spoken about the country's performance, Hungary's daily Nemzeti Sport newspaper was curious as to what the head of government thought of the Tokyo Olympics, his assessment of the Hungarian athletes' results, and how their performance matched his expectations. Excerpts of the interview follow.

“A prime minister should not pass judgement,” Hungarian Prime Minister Viktor Orban told the country’s sports daily Nemzeti Sport, adding that evaluation is the job of sports federations and the Olympic Committee.

“But this prime minister is also a Hungarian, and all Hungarians are judgemental – taxi drivers, hair stylists, nuclear scientists and prime ministers, as well. A Hungarian person can never forego formulating an opinion on the country’s performance at the Olympics. I’ve also formulated mine. When I was a little kid, I followed the Olympic Games on radio or television sitting on my grandfather’s lap. My grandfather used to teach me that there is nothing conceivably more important than an athlete entering into a competition while wearing the national colours.

So, I’ve been following the world of international sports and especially the performance of Hungarians, ever since I was a kid. I’ve noticed that the athletes receiving the gold medals at this level rarely come as a surprise. Olympic golds generally go to those who are already at the very pinnacle of their particular sport. Before the Olympics, I always compile a calculation of not only how many wins we have a chance at, but also how many wins we are sure to rake in based on the odds. This time I had this number at thirteen or fourteen. I’ve also noticed that usually about half of the slated wins come through. And we DO win half of the competitions we’re predicted to.

The Hungarian premier said he was counting on three golds in fencing – that “we would rake in medals” in team and individual sabre and in individual epee. He added that “I predicted two golds in swimming, one for Kristof Milak and one for Katinka Hosszu – who was unable to make up for the many months of preparation lost to the pandemic due to the nature of her training plan

Three-time Olympic champion Katinka Hosszu finished seventh in the 200m medley finals in Tokyo. At the time, she thanked all those who had supported her on social media. Below her post, Viktor Orban stood up for her by commenting, “once a champion, forever a champion. The one in whose honour the national flag has been raised even once at the Olympic games will always remain our hero.”

While speaking to the sports daily Nemzeti Sport, PM Orban reiterated, “once a champion, forever a champion. How many people can say that the Hungarian national anthem sounded and our national flag was hoisted in their honour at a world competition? There aren’t that many, and they deserve our respect.”

Viktor Orban also spoke about the significance of the Olympic Games. As he put it, “even when there is no war, nations still want to compare their talents and strength, and this compulsion will never die out in humanity. An exemplary and peaceful, yet equally ruthless form of this [comparing] is the Olympics.” He added, “in peacetime, science, sports and culture provide the context where the competitive instincts of nations can manifest.”

According to the Hungarian prime minister, the Olympic Games are especially interesting “because they are the only competition to which the world’s athletes and champions adjust their life and career cycles. This is where they exert the greatest effort, this is where the greatest focus is placed, this is where everyone wants to be at their best and the best.

This is why the Olympics is a unique opportunity for the peaceful competition between nations.”

“Some countries are ready to admit this, others are less willing to,” he said, pointing out that “for Hungary, the Olympics are an unquestionable tradition. After all, what can a country of ten million people add to humanity? In the economy, our possibilities are limited, but in terms of talent, the sky is the limit. It is not quantity, but quality that matters, as well as competitiveness, determination and courage.

Hungary is among the most competitive nations in the world,” PM Orban highlighted.

He noted that this is palpable in economic performance and in science, but most spectacularly apparent in sports – the Olympics being the best case in point. “Hungarian competitiveness and the Olympics are closely associated in the Hungarian mindset. I’m not saying it’s a perfectly accurate measure, but our Olympic performance always says something about the state of our country,” he said.

“The Hungarian athletes who were winners this time have done a great service to their homeland, and with their help, we may be able to re-establish the concept of the ‘male-ideal’ in Hungarian society,” PM Orban said, referring to the fact that all but one of the Hungarian golds in Tokyo were won by men.

“Men face so many challenges in today’s modern age when masculine virtues are no longer appreciated. Respect for physique, for taking responsibility for one’s family, for the mental and physical strength needed to provide care has all but vanished from the world. Yet that’s what drives a man, and that’s where his sports performance stems from. But if you look at the Hungarian gold medallist men, they are not only champions but also male idols,” Mr Orban explained. He pointed out that they are “sportsmen, who we can point to and say to our grandchildren ‘Look, this is what a man looks like. This is what his physique and his mental strength looks like, this is how he fights, this is how he loves his family, and this is how he sacrifices ten years of his life, if necessary, to achieve his goal’.”

At the same time, the premier stressed that “the notion of the female ideal has always been strong, and Hungarian women could always be counted on in times of trouble, from the women of Eger [a historic reference to the contribution of women in defending a fortress from Ottoman attack in the 16th century] to our female Olympic champions, there has never been a problem in this regard.”

Regarding the fact that many of the current Hungarian medallists are military officers, the PM said he was sure that “rebuilding the army, introducing everyday physical education in schools, and that our sportsmen have regained positions on top of the podium, and that we have role model football players again will in aggregate be beneficial for Hungary. All of these factors contribute greatly to the raising and education of our children.”

Considering the reasons for Hungary’s successes in sports, Mr Orban said that many factors are required, including luck, however, he added, “you cannot win an Olympic gold medal without antecedents.

Hungarian successes are not solely about the past few years or decades, but about the preparation and development of the athlete, the current state of the country, and undoubtedly also the past hundred years.”

“We always view our champions, our gold medallists, as belonging to separate league,” he said, adding that champions deserve placement in a separate category, as they are the best of the best, this is why mythology surrounds the gold medal in Hungary.

PM Orban spoke of how sports are being developed in Hungary.

“The first tier involves bolstering physical education in schools, in amateur clubs, and promoting everyday physical activity. This includes making the country fully accessible: maintaining our hiking trails and lakes, building bicycle paths, and building regional sports halls and swimming pools, accessible to all – not just for competitive athletes, but for everyone,” the premier explained, saying that this is the first step in getting the population moving. “Hungarians are not keen on exercising. They work a lot and after work it is time for relaxing, not exercising,” he said.

“The second tier of sports development in Hungary is training young talents. This is where the possibility of becoming a professional athlete arises, consequently, we develop this area based on long-term agreements with sports federations,” the PM said. “The federations are good partners, but here we have to be honest about the situation. Eight or nine years have passed, they have received a huge amount of opportunities and money, now each of them has to prepare an expert and financial report on how they utilised them. Reporting, accounting, and then a new long-term agreement, this is what’s next in each sport.”

On whether the traditional role and strength of sports would prevail in the next decades, Mr Orban said that

sport still stands for the preservation of long-established, tried and true concepts that have endured for thousands of years.

“We live in a world where respect for traditions and time-honoured things is fading. This is what can be seen in the realm of the internet, and in globalism, which is constantly trying to marginalise nations, a phenomenon also creeping into sports,” the Hungarian PM said. “Here is this whole LGBTQ craze, the issue of biological sex, the unisex world, and so on. Everything that has brought the world this far in the past two thousand years is being called into question. There is a constant temptation that a brave new world is coming that is radically different from what we have lived in so far. And this is reaching our children,” Mr Orban explained.

Sport is still the concept of protecting the tried and tested, he added, emphasizing that “at the Olympics, after all, you have to pit your strength against another’s, fight honestly and in the end someone emerges as champion. Competition is not a bad thing, it is good, and there are separate men’s and women’s events, success is also the success of the community which the athlete represents, not merely an individual’s triumph, and a national flag is always hoisted – there is no global flag.”

Regarding the postponing of the Olympics last year, Mr Orban said that “everyone agrees that humanity is facing calamitous times, as we have epidemics, wave after wave of migration, the effects of climate change, and now that the leading and world-ordering role of the West – winner of the Cold War – has been called into question, a lot of uncertainty has arisen in the world. Dangerous times are ahead, we must have our wits about us.”