A penis is a penis, not a male sex organ

In the spirit of inclusion, some of the until now generally accepted definitions have been changed in the so-called family planning glossary created in the wake of the feminist movements. As explained, for example, a penis is a penis, not a male sex organ, and gays, bisexuals and lesbians are transphobic.

The French satirical weekly Charlie Hebdo published an article drawing attention to some of the terms in the so-called trans glossary (lexique trans) issued by the Planning familial (family planning) feminist group. For instance, one definition says that

a penis is a penis, not a male sex organ.

In the spirit of inclusion, the glossary in question aims to alter certain definitions that have hitherto been universally accepted, the author of the article points out. The Planning familial association argues that their definitions create consensus within their own group, stressing that the glossary is intended to express the utmost respect for all people. 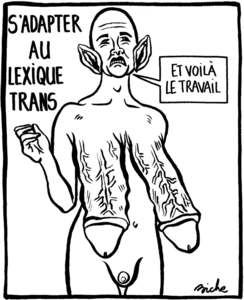 It goes without saying that transphobia is a reality and must be eliminated, Charlie Hebdo notes but also points out that twisting definitions or advocating the use of certain words while cancelling others is rather absurd.

Based on the glossary, it is not a good idea to use, for example the words male and female, and it is advisable to avoid masculine and feminine terms. Charlie Hebdo points out that while the lexicon calls bisexuals transphobes, back in 2015, an advocacy organisation SOS Homophobie was studying the invisibility of bisexual people.

However, the lexicon says that the word bisexuality is transphobic and should be banned. The same label appears for the terms gay and lesbian, with the writers explaining that those should also be cancelled. The article mentions that there was a time when Planning was a feminist organisation which simply condemned gender stereotypes, but has now made the mistake of using vague jargon. Charlie Hebdo trusts that

family planning counsellors working in schools will not use the above vocabulary and definitions,

adding that the trans lexicon was compiled by a group of young people who had never done any fieldwork.

According to its website, Planning Familial is a feminist public education organisation which has been operating and campaigning for 60 years for gender equality and the opportunity for all people to experience their own sexuality in full without having to deal with unwanted pregnancies or sexually transmitted infections. They claim to protect the right to sex education, contraception and abortion, and the right to fight against gender and sexual orientation-based violence and discrimination, including the rights of LGBTQI + people.