A network is emerging where the link between the activist channel Partizan, run by Marton Gulyas, DatAdat, linked to ex-Prime Minister Gordon Bajnai, and the Soros network can be directly and indirectly detected – with foreign donors appearing in the background.

The financial report for 2021 of the Partizan Foundation for the Production of System Critical Content, which is the backbone of the media company, does not give readers a detailed insight into the organisation’s operations, and thus the identity of its international donors, as it is not required to submit a report, which is only mandatory for public benefit purpose entities. We can only rely on what Mr Gulyas has admitted so far:

There is room for improvement as far as the transparency of Partizan is concerned, as Mr Gulyas himself admitted in a recent interview with Telex, in which he also said that their operation is not currently in any danger – despite the fact that micro-donations from Patreon only account for a third to a quarter of the channel’s revenue.

Thus, the growth and expansion that Partizan went through just before the 2022 parliamentary elections is mainly due to foreign donors, and Mr Gulyas has a significant role in attracting them. This is clearly shown by the fact that during the 2018 election campaign, Gulyas’s former channel Slejm was funded in a similar way, with the only difference that the donations were received by the Kozos Orszag (Common Country) Movement and the similarly named foundation behind it. As V4NA reported earlier, foreign money arrived into the Kozos Orszag Foundation after Gulyas’s appearance, and international donors vanished after his departure.

The Foundation for Democracy and Pluralism

Founded last year, this is the newest of Partizan’s three donors. Their mission is to promote fair societies and pluralistic democracies by supporting European non-profit organisations “working towards this common goal.”

The founder of the NGO is Daniel Sachs, a Swedish businessman and activist who is a member of the global management of George Soros’s Open Society Foundations. He also sits on the European Council on Foreign Relations think tank, where his colleagues include

Speaking of DatAdat, besides Mr Bajnai and Mr Dessewffy, Adam Ficsor and Viktor Szigetvari are also linked to the company, which deals with consulting, data services and campaign technology. Mr Ficsor was intelligence minister of the Bajnai government, while Mr Szigetvary was the PM’s advisor and chief of staff and also served as state secretary before 2010. 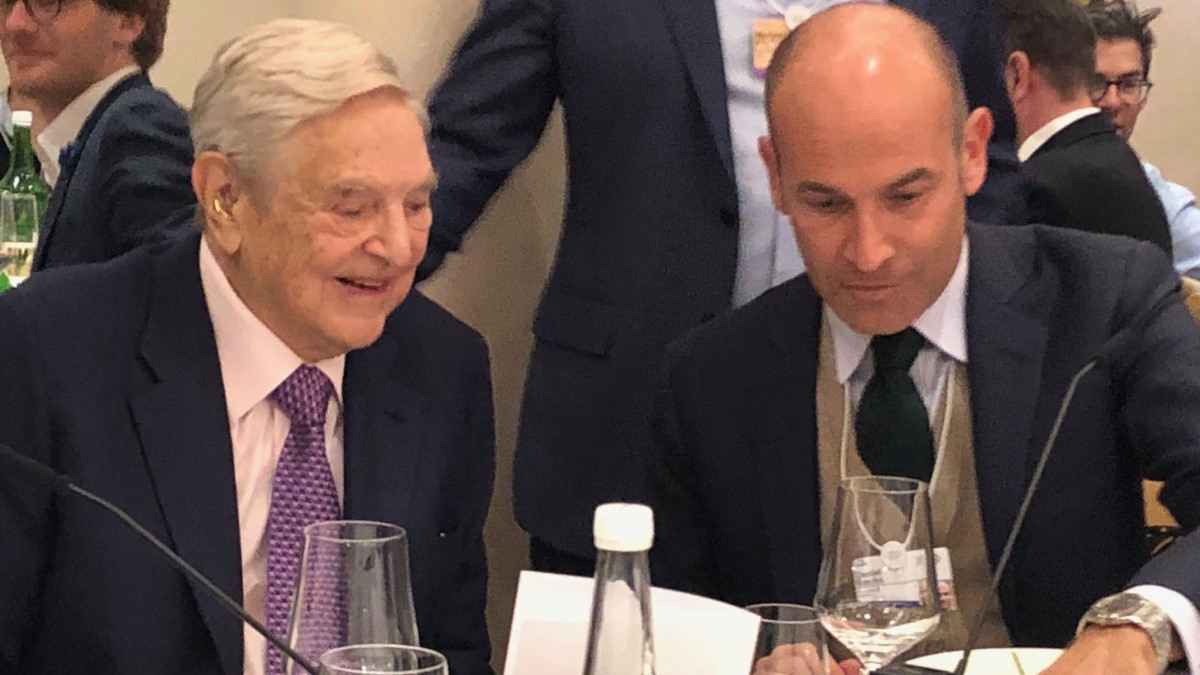 Marton Gulyas also divulged that they cooperated with DatAdat during the parliamentary elections. That is, Partizan was supported by a foreign organisation, The Foundation for Democracy and Pluralism, whose leader,

Daniel Sachs is in the same circle as George Soros, Gordon Bajnai and Klara Dobrev.

In other words, a network emerges where the connection between Gulyas’s Partizan, DatAdat linked to Bajnai and the Soros network can be demonstrated not only indirectly but also directly.

The other supporter of Gulyas’s channel is a well-known foreign NGO with sizeable resources.The founding of the German Marshall Fund of the United States was announced in 1972 by Willy Brandt, former president of West Germany at Harvard University, on the 25th anniversary of the Marshall Plan providing foreign aid for the reconstruction of Western Europe after World War II. The organisation, which is based in Washington and has offices in Berlin, Belgrade and Bucharest, is committed to the idea that the United States and Europe are “stronger together,” and supports pro-democracy, human rights and other initiatives.

On the donor list of German Marshall Fund are several EU institutions, Swedish authorities, US embassies, tech companies, aid and development funds, and Soros’s foundation, so Partizan might even have indirectly accessed the resources of the Soros network.

Partizan’s most mysterious donor is the National Endowment for Democracy (NED). Surprisingly, NED writes about its history on its own website. They write that in the aftermath of World War II U.S. policy makers resorted to covert means, secretly sending advisers, equipment, and funds to support newspapers and parties under siege in Europe. When it was revealed in the late 1960’s that

the Johnson Administration concluded that such funding should cease, recommending establishment of “a public-private mechanism” to fund overseas activities openly. National Endowment for Democracy was born as part of this process to replace CIA funding. It finances the US’s democracy export proclaimed by the US. As V4NA wrote, the organisation paid for the road show of Partizan before the elections.

This is the structure of the international network

Márton Gulyas and the left-wing prime ministerial candidate also admitted that they received international and US funding. The formal and informal network of George Soros can be clearly identified behind Partizan, and the YouTube channel’s host admitted that they cooperated with DatAdat, the campaign technology company linked to Gordon Bajnai. 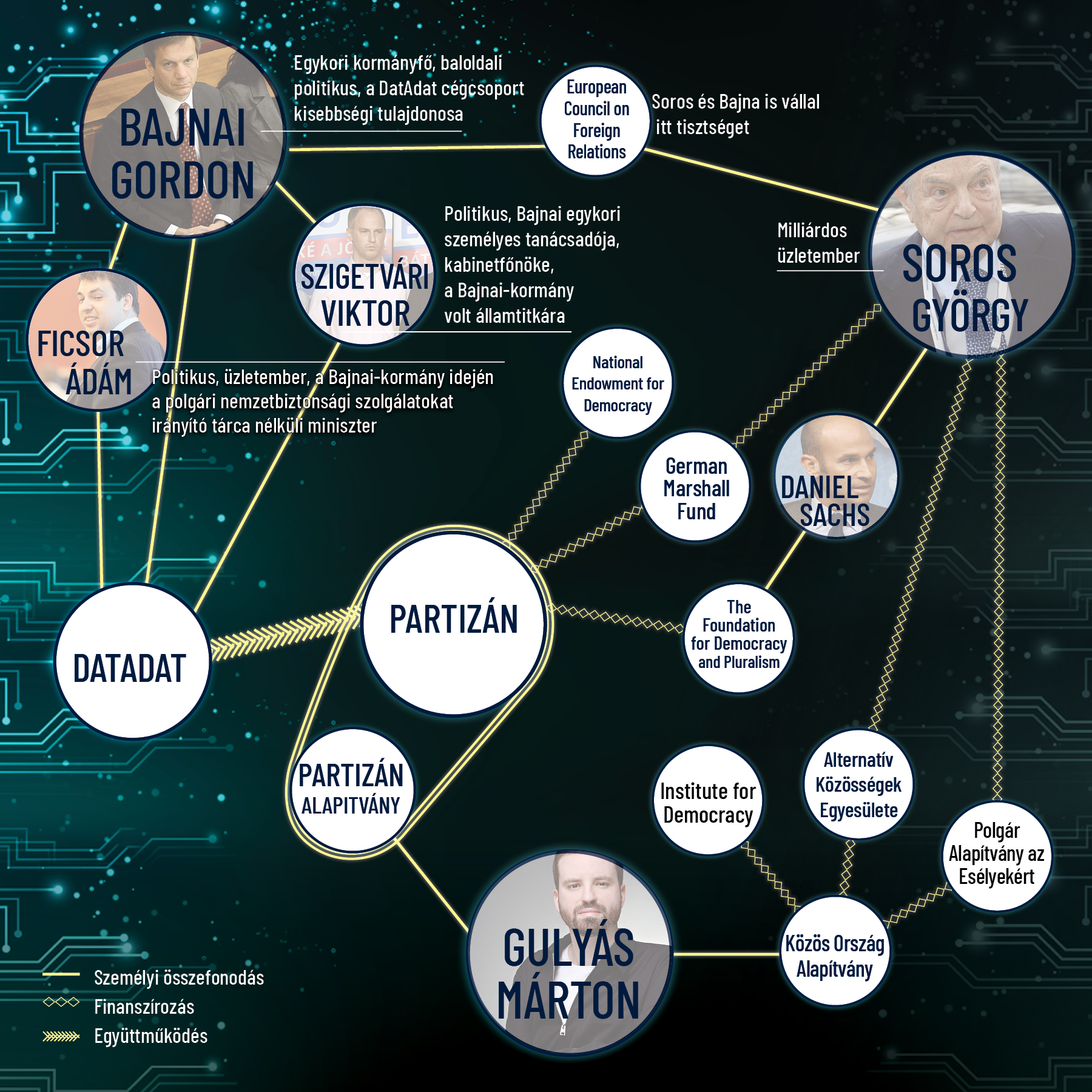 International and overseas donors appeared behind the organisation of Partizan and prime minister candidate Peter Marki-Zay in the year before the parliamentary elections. This help was certainly needed so that both the Partizan and the Everyone’s Hungary Movement could carry out an intensive campaign in the autumn of 2021 and the spring of 2022.

In addition to Bajnai, about whom Gyula Gansperger, who probably knows the ex-government leader from the Wallis group quite well, said that he is a man of foreign people – his business associates and confidantes also appeared in the campaign, such as Adam Ficsor and Viktor Szigetvari with the campaign technology company, David Koranyi with the Action for Democracy initiative, which collected donations for Marki-Zay’s movement for the purpose of “disseminating information.”

Looking at it from this point of view, it does not seem a coincidence that Peter Marki-Zay, as the prime ministerial candidate of the opposition alliance was a regular guest of Partizan. It is also not surprising that Bajnai and later his men appeared first behind the mayor of Budapest, Gergely Karacsony, and then Peter Marki-Zay.