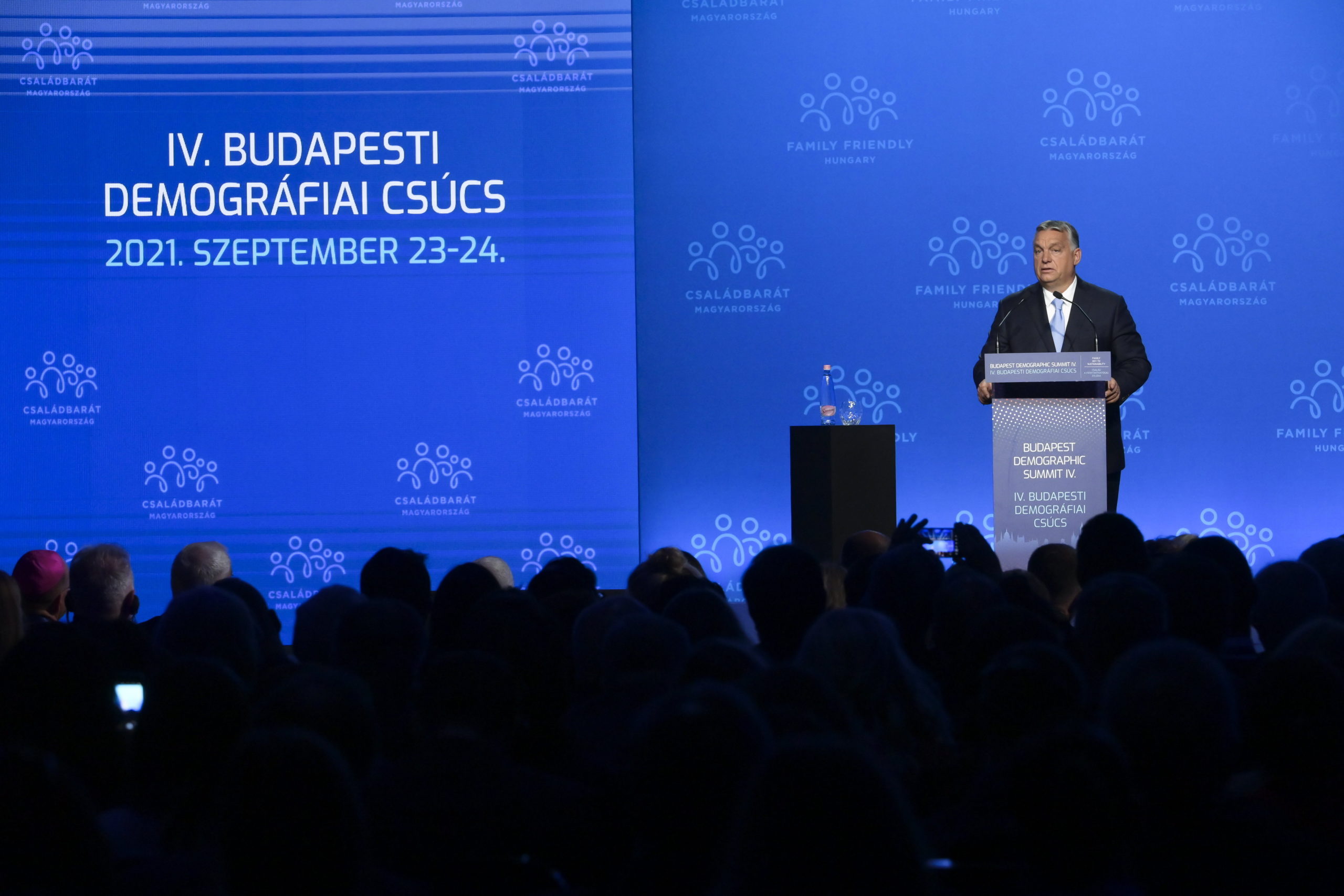 Tasks of the state include removing the obstacles to starting a family. Ten years ago, the Hungarian government identified five areas of focus to build the country's family policy on, Hungarian PM Viktor Orban said, and also addressed other issues at the 4th Demographic Summit in Budapest.

“The Demographic Summit in Budapest is not merely a scientific conference,” Viktor Orban began his speech at the 4th such meeting. The difficulty of demographic problems is not only a matter of recognition, he said, but solutions must also be found, and

the most difficult part involves transforming the findings into a government programme.

That is why the participants at the summit range from scientists and thinkers to politicians, he added.

Multi-generational families have disappeared in Europe and women have become part of the labour market, which has brought a huge economic upturn, the premier noted, stressing that women start working at the age when they also have the best chances of having children. This trend needs to be reversed, but it is very difficult, Mr Orban said.

“Handing out money to families is easy”, he said. “But it slows down economies and ultimately destroys families.” We need to support families in a way which strengthens the economy and enables those who can work to find jobs. To this end, the right-wing government has been spending five percent of GDP on family support since 2010, and has linked work to benefits, Mr Orban said. “We want to provide women with a choice: to work if they want to or have children if they so prefer.”

120,000 fewer children would have been born in the last ten years in Hungary if the birthrate trend of 2010 had continued, the Hungarian premier said. In contrast, the number of marriages has doubled in ten years and the number of abortions has fallen by 41 per cent in the country.

Hungary is on the defence because the Western left is attacking: the concept of the family is being relativised through the LGBTQ lobbyists and gender propaganda, the PM emphasized, adding that Hungary

has a constitutional family and child protection system which automatically activates in case of attack, regardless of the source of the attack.

“The family and the nation are the most important foundations of our coexistence. It is an alliance between the present and the past,” the premier quoted the Hungarian Fundamental Law.

“Protecting Hungary’s constitutional identity and Christian culture is the duty of the state. Parents have the right to choose the nature of education for their child. Children are responsibe [as adults] for caring for their parents. A father is a man, a mother is a woman – these are the tenets – layed down in the Fundamental Law of the country – that we are being attacked for,” Viktor Orban pointed out.

The premier believes that it is a duty of the state to remove the obstacles to starting a family. Ten years ago, the government identified five areas to focus on in establishing the Hungarian family policy:

1. having children should be an advantage and not a disadvantage financially, as well

2. facilitating families in owning their own home

5. protecting the institution of the family and children.

In Hungary, family policy is shaped based on referendums and national consultations, while Brussels has never asked the people about their view regarding the LGBTQ and gender propaganda, Mr Orban added.

“We are fighting together for the future of Europe”

“As a result of the game played by the great powers at the end of the Second World War, we ended up on the communist side of the curtain; since the change of regime, we have been fighting together for the future of Europe, for Europe not forgetting about its Christian roots, and for a regulated migration. We are also fighting together with the prime ministers [in attendance] to say no to migration and for the EU to also support the family based on the relationship between a man and a woman,” Mr Orban said.

He called on his Slovenian counterpart to win next year’s election, saying that without Slovenia and the Czech Republic it would not work.

Regarding the situation in the Balkans, Mr Orban said the EU must be persuaded to view the Balkans not as a buffer zone, but as a region to be integrated, because

without Serbia and the Balkans, Europe is incomplete.

“The West, which is better off than us, cannot reproduce itself. They cannot even decide whether this is a problem. Those who think this is not a problem argue in favour of automated production and artificial intelligence. This is a technocratic vision for the future. Apart from them are those who perceive the problem, but want to remedy it through migration. Mass migration and wilkommenskultur are about bringing in a new working class,” he said, stressing that

“For us, migration means identity formation.”

As he put it, “In the West, new leftist, Marxist movements are gaining ground at a rapid pace. They are trying to miseducate our children starting as early as kindergarten, using minors as pride activists and sensitising them. We, on the other hand, are inoculated against the ‘woke virus’: our history protects us from the cultural left, like the vaccines do against the coronavirus,” he added.

At the Budapest Demographic Summit, the heads of state and government signed a declaration committing themselves to supporting families in order to promote having children and facilitating young people’s family planning goals through effective family policies. Furthermore, they agree to incentivise fair wages and the development of a work-based economy that provides jobs. They also call for demographic aspects to be taken into account in all EU policies.