Revealing video from US under secretary of state

The message of Polish MEP Radek Sikorski thanking the US after the explosions at the gas pipelines adds new meaning to the words of US Under Secretary of State Victoria Nuland.

In the video released to the public at the end of January, US Under Secretary of State Victoria Nuland tells a press conference that the US will have Nord Stream 2 shut down if Russia crosses Ukraine’s border.

“I want to be clear with you today. If Russia invades Ukraine, one way or another, Nord Stream 2 will not move forward,”

Ms Nuland stated at the time.

.@UnderSecStateP Victoria Nuland: “If Russia invades Ukraine, one way or another, Nord Stream 2 will not move forward.” pic.twitter.com/hEGBrx6HJj

“Are you still looking for the answer to the question of who is behind all the events in Ukraine, behind the destruction of pan-European cooperation and the global crisis?” Russia’s Ministry of Foreign Affairs Spokeswoman Maria Zakharova asked on Telegram. In her post, Ms Zakharova was obviously hinting at the idea formulated earlier by the US that the Nord Stream pipelines should be eliminated sooner or later. And just a few days ago, the news hit like a bombshell that leaks were suddenly detected in the Nord Stream pipeline system. By Tuesday evening, everyone was unanimously claiming that explosions had caused the damage to the pipes. Experts do not yet know exactly who is responsible for the act.

As Nord Stream pipelines are the most important for gas deliveries to Europe, many have warned in recent days that the uncertainty surrounding the operation of Nord Stream will increase the significance of other pipelines. Speaking at a meeting of energy ministers of the Organization of Turkic States (OTS) on Wednesday, Hungarian Foreign Minister Peter Szijjarto said,

“The value of the TurkStream has been enhanced by the fact that the operation of the Nord Stream, which runs under the Baltic Sea, is not guaranteed.” He therefore called on the leaders of the transit countries through which the pipeline passes to heighten monitoring efforts to protect its functioning. He also pointed out that the Hungarian government has been under attack for the implementation of the TurkStream project, but that without the pipeline, Hungary would be in dire straits.

FM Szijjarto stressed that 50-60 per cent of Russian gas arrives in Hungary via the TurkStream pipeline, which has enabled the country to replenish its stores to 42 per cent of its annual consumption, noting that the level of reservoirs in Western Europe only covers 23per cent of annual consumption. As 10.5 per cent of global gas reserves are located in Central Asia, he urges the European Union to make every effort to build the infrastructure needed to take advantage of gas resources in Azerbaijan, the Caucasus and Central Asia, and to conclude the necessary trade agreements.

Returning to the topic of the Nord Stream pipeline system, Polish MEP Radek Sikorski thanked the US after the damaging explosions. 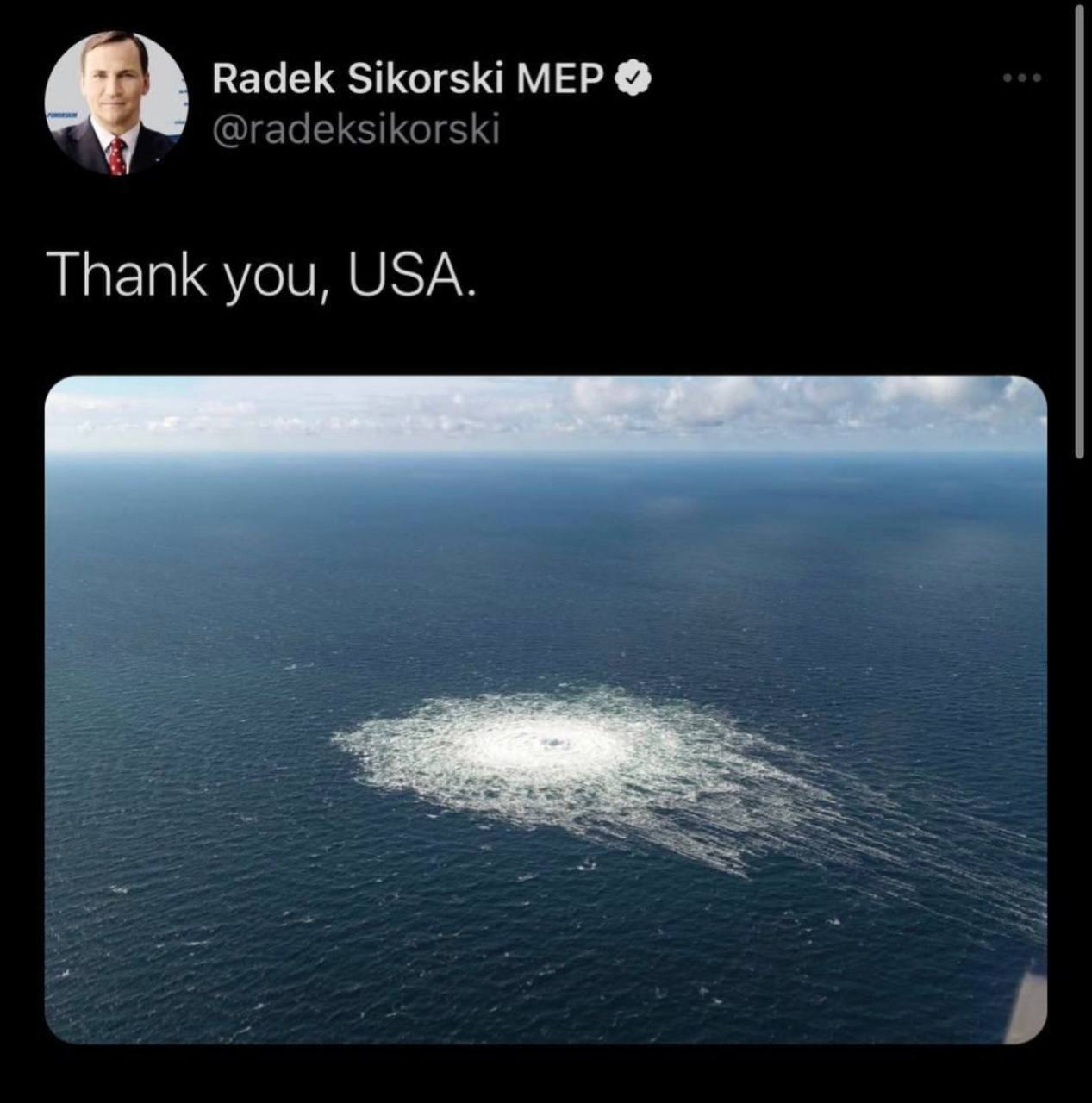 Later, the Polish MEP expressed his pleasure in more detail posting, “I am glad that the Nord Stream, which all Polish governments have fought for 20 years, is paralyzed in three quarters. This is good for Poland. May the Danish investigation find the perpetrators. I naturally make Any working hypotheses I have as to who had the motive and the ability to do this, I make on my own behalf so only on my own behalf.”