We looked at the data, which suggest that a seventh of the shipments from Ukraine ended up in Spain. In the deal between Russia and Ukraine reached in late June, the several million tonnes of Ukrainian grain stuck in Black Sea ports were permitted further shipping passage as of early August. The UN says the step was especially important for under-developed countries whose food supply would have been endangered had the shipments not resumed.

In recent days, Russian President Vladimir Putin has repeatedly put forward the possibility of revising the agreement, arguing that most shipments are being delivered to rich EU countries. We looked at the data provided by the centre coordinating the shipments, and the figures suggest that far more ships have left the ports for Spain or Italy than for Egypt, Iran or India. The situation is the same with the amounts delivered: 15 per cent of the cereals, for example, were delivered to Spain.

Ukraine and Russia signed the agreement on restarting grain exports on 22 June. Under the deal, brokered by Turkey and the United Nations, Russia guarantees the safety of the grain transport ships from Black Sea ports, which have been under blockade since the beginning of the war. Thus, the export of the 20 million tonnes of grain stuck in the ports for months could begin. According to the agreement, the Western countries also eased the sanctions imposed on the export of Russian grain.

“This is an agreement for the world.”

— @antonioguterres calls signing of Black Sea Grain Initiative a beacon of hope, possibility & relief in a world that needs it more than ever. https://t.co/hRUq11fMvf pic.twitter.com/17oHzYnGR9

The world reacted to the agreement with a deep sigh of relief, as the deal was extremely important to prevent a global food crisis, which, according to the UN, would have primarily impacted poor countries. Ukraine is one of the largest grain exporters of the world, providing some 10 per cent of global wheat production, whereas the two warring countries together cover almost a third of the global import demand. The vast majority of Ukrainian cereals are loaded into ships at Ukrainian port cities on the Black Sea, such as Odessa, Chornomorsk or Pivdennyi, which is why the agreement, concluded in Istanbul for a period four months, was crucial.

The deliveries duly started after the conclusion of the agreement, with the first ship leaving Odessa on 1 August, with more than 26 thousand tonnes of corn on board. Transport has been uninterrupted since.

In the past few days, however, Vladimir Putin has repeatedly called for the revisiting of the agreement. His reason: grain transports from Ukraine are not shipped to so-called poor countries as originally intended, but to the rich countries of the EU. Putin spoke about this at the Eastern Economic Forum held in Vladivostok on 7 September, and he also pointed out the situation to UN Secretary General Antonio Guterres in a phone conversation they had a few days ago.

Data published by the Istanbul-based Joint Coordination Centre (JCC), which manages Ukrainian grain exports, reveal that 136 voyages had transported more than 3 million tonnes of grain and other foodstuffs from Ukrainian ports until14 September. 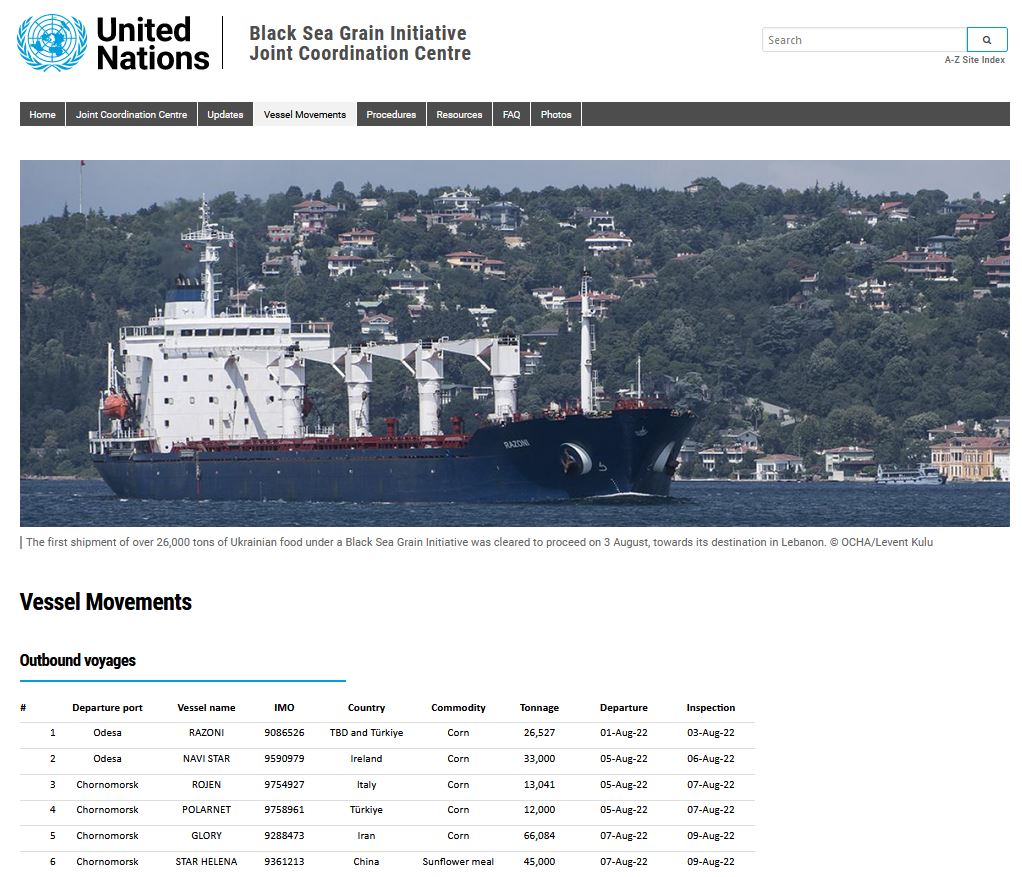 A closer look at the data reveals that most of the ships were bound for Turkey, with 55 of the 136 shipments that left the port ending up there. Much of the grain unloaded here is re-exported, for example to Africa and the Middle East. However, looking at the data, it can be seen that a significant amount of grain has also been exported to EU countries.

The second shipment, which left Odessa on 5 August, went to Ireland with 33,000 tonnes of maize on board. On the same day, the third shipment was bound for Italy with a load of some thirteen thousand tonnes. However, according to the records of the centre, there have been shipments to:

Based on data from the Joint Coordination Centre in Istanbul, Euronews reported on 7 September that 30 per cent of the cargoes went to low- and middle-income countries. However, they also pointed out that around thirty-six per cent of the grain shipped until then went to European countries. The same rate for African countries was 17 per cent at the time. One more interesting fact: after 7 September, more ships left for Spain and Italy than before. Since 7 September, 11 shipments departed for Spanish ports and 10 for Italian ports.