The formation of the battalion dates back to 2014 and like other all-volunteer fighting units, is under the control of the interior ministry, but also receives oligarch funding. Two far-right organisations constitute the core of the militia.

In a video message posted on Twitter, Denys Prokopenko, commander of the Azov Regiment of Ukraine’s National Guard, announced that they have given up fighting and surrendered.

Another video was also published showing the laying down of arms.

But who are the Azov Battalion fighters?

Alongside regular units of the military, several volunteer units are engaged in the fighting in the Donetsk and Luhansk regions. These volunteer units include the Donbass, Aidar and Azov Battalions, which are usually dispatched to the most dangerous areas. Some of the Azov fighters openly voice their radical views, dividing opinions on the Azov regiment even in Kyiv. Some consider Azov fighters to be dangerous neo-Nazis.

The Azov Battalion was formed in May 2014 and like other all-volunteer military units, it is under the control of the interior ministry. The battalion had previously been engaged in the liberation of Mariupol from the separatists, and in addition to the state, funding for the military actions also came from oligarchs, who have been financing the militia ever since. One of the oligarchs is Ihor Kolomoyskyi, who was previously governor of the Dnipropetrovsk region, and in 2019, he supported the campaign of Ukrainian President Volodymyr Zelensky. Oleh Odnorozhenko, deputy commander of the Azov Battalion, said that one of their current tasks is to “control the [Sea of Azov] coast and fight the separatist underworld”.

the deputy commander said, adding that the battalion was formed of units of so-called “men in black”, that is, volunteer units of Ukrainian nationalists. The unit also consists of foreigners, among others, people with ties to the far-right Swedes Party. Those voicing their criticism of the Azov regiment often point out that the ideology of its members is close to German national socialism and Italian fascism. The battalion’s insignia is also reminiscent of the swastika.

In his youth, Andrei Biletsky – also known as the White Leader – the militia’s first commander, was active in neo-Nazi and ultra nationalist groups for a long time. Besides promoting the supremacy of the white race, he repeatedly claimed that he intended to defend the West and destroy democracy in Europe, as well as to replace capitalism with “Nazi democracy”.

“Of course, a significant number of Azovites are Ukrainian nationalists by ideology. For us, this doesn’t mean occupying foreign territories. The idea is to create a large independent country. This is why I personally call it liberating nationalism,”

said the “White Leader” in an interview. 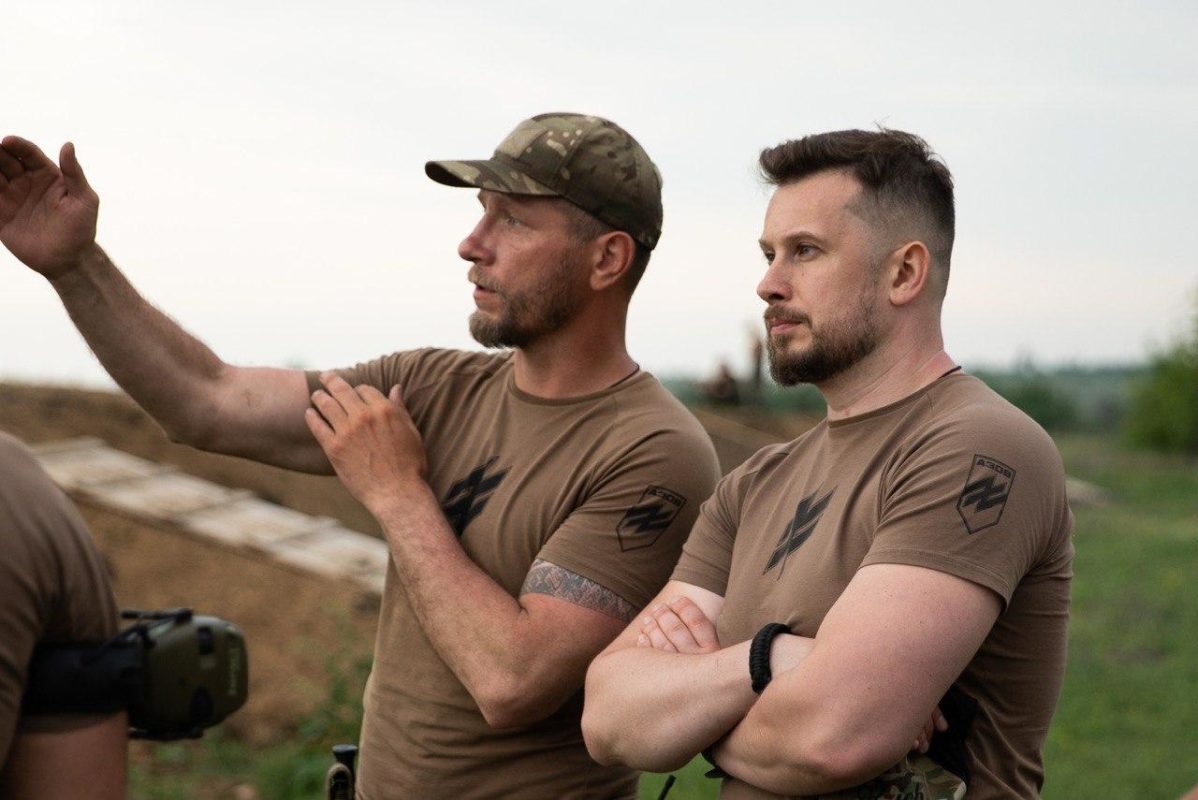 One group in the Azov Regiment is the Misanthropic Division, which was originally a neo-Nazi armed organisation founded in 2013. The ideological principles of the organisation draw on the Nazi notions of racial, national and ethnic superiority. The group later joined Azov. In the photo below battlefield buddies of the two groups are proudly posing together.

In this photo, the young soldiers pose with a photo of their idol, Adolf Hitler. 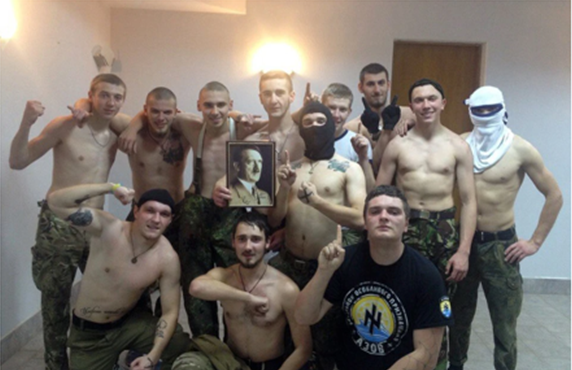 It is not surprising then, that among the photos of the team, it is easy to find pictures of them performing Nazi salute. 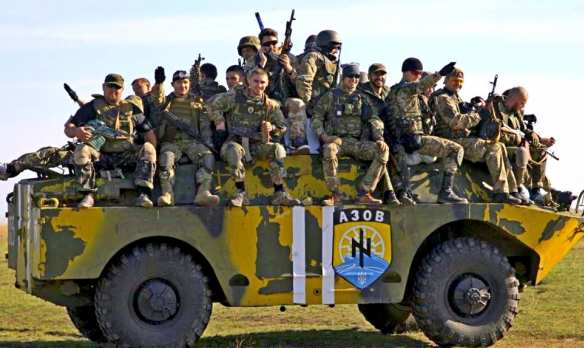 One of the most striking photos shows the swastika in the middle of the Ukrainian flag, with an Azov fighter in front of it. 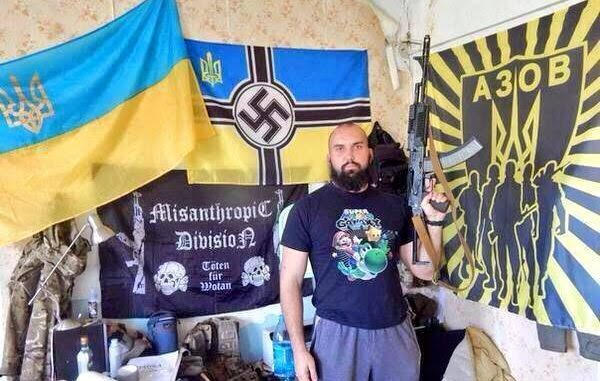 Azov members, in addition to their penchant for wearing symbols reminiscent of Nazi symbols on their clothing, have a history of serious human rights violations, as proven by the UN. One report described how Azov evicted civilians from their homes a few years ago to loot the apartments and store their weapons in them. The document also reports cases of Azov fighters torturing Russian minority civilians or raping women. The militia even torture their own members if they deem necessary, according to the former deputy commander of the group, Yaroslav Gonchar. He said that when he wanted to leave the battalion because he disagreed with the looting actions, his comrades tortured him.

“Me and 15 other fighters left the battalion because we disagreed, including ideological dissent, with the actions of the commanders and their subordinates. Instead of fighting, they looted and looted. In my presence, two truckloads of looted property were taken from the dacha of President Yanukovych’s wife, Lyudmila Yanukovych, in the village of Urzuf. Property was also stolen from Yanukovych’s hunting ground in Starodubivka. When I declared that such actions and open support for National Socialism were unacceptable in the battalion, I was tied up and thrown into a cellar. There I was tortured. Those who claim that the Azov battalion is a righteous group are telling blatant lies. The battalion has become a gang, only far-right members are accepted. If you do not have national socialist convictions, you will not be admitted to Azov,

the former deputy commander said in a newspaper interview.

But the Russian minority was not the only one that Azov soldiers terrorised. Earlier they had also been present in western Ukraine, when they marched in Transcarpathia, home to a significant ethnic Hungarian minority. The radical far-right militants shouted slogans inciting the extermination of the Hungarian community, including

“Knife at the throat of Hungarians!”

The training of Azov volunteers was previously supported by the United States and Canada, but in 2015 both countries withdrew their support due to the organisation’s ideological affiliation. Later, in 2019, a group of US representatives asked the State Department to place Azov on the list of foreign terrorist organisations, but this did not happen. Ukrainian President Volodymyr Zelensky has repeatedly stressed his pride in the group. He admitted in an interview with Fox news that Azov is part of the Ukrainian army.

“Azov is one of the many national battalions. They are what they are. They defend our country. I would like to explain to you that all the members of these battalions are currently members of the Ukrainian army.”

President Zelensky was recently joined by Azov members when he addressed the Greek Parliament online.