A video released on Sunday refuted almost all the claims of Hungarian left-wing politicians about the millions of dollars received from America. It turns out that according to the organisation's official fundraising platform, only eleven people contributed the 3 billion forints (approx 7.2 million euros) transferred by Action for Democracy to Hungarian accounts. Also revealed was that donors did not need to provide a passport number to pay in their pledges, and that the money was intended not for some kind of "culture change", but for the elections.

Following the scandal over contributions from the US to support opposition party campaigns in Hungary’s elections, Action for Democracy has revamped its website, giving it a completely new look. For some reason, the organisation, led by David Koranyi, Budapest Mayor Gergely Karacsony’s senior advisor, thought it would be better to change the interface. However, apparently, Koranyi’s team did not do a perfect job in rewriting the past, the Origo portal points out.

A short internet search was enough for Megafon to find Action for Democracy’s still active fundraising platform, which exposed virtually every leftist lie. This was done with the help of the Internet Archive, a so-called digital archive, which is well known among IT professionals. This tool periodically does back-ups of sites on the web, making it possible to view previous versions of a page. 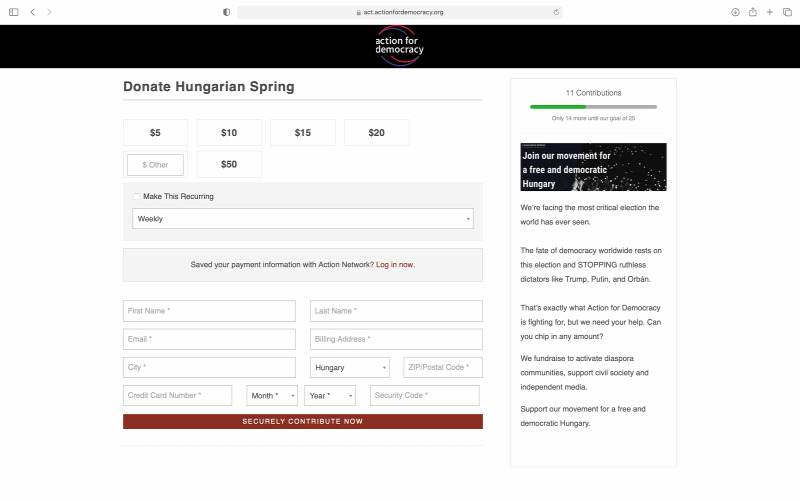 That’s what Philip Rakay and his team did with the actionfordemocracy.org website, where they found some shocking information.

From the information saved on 24 March – the election was on 3 April – it emerged that the organisation was in full swing preparing for the Hungarian parliamentary elections and described Hungary as a Battleground State, a term well known in the US.

Clicking on the fundraising section of the archived website, you can read the following: We are facing the most critical election the world has ever seen. The fate of democracy depends on this election and on stopping dictators like Orban. This is what Action for Democracy is fighting for. And then comes the question, “Will you donate to this cause?”

In this light, there can be no doubt that the organisation led by Mr Koranyi was preparing for the elections, and that its goal was to overthrow the Orban government.

But that’s not all.

The website also revealed that, contrary to the Left’s former prime ministerial candidate’s claim of tens of thousands of supporters gave micro-donations, there were only eleven (!), as the column showing the number of donors shows.

It is worth remembering that Mr Koranyi had previously written about thousands of supporters backing his organisation, while the former prime ministerial hopeful, Peter Marki-Zay, spoke last week about “tens of thousands” of donors.

It is worth noting that Action for Democracy, founded on 24 February, started making transfers as early as 1 March, for example, nearly 700,000 dollars to Oraculum 2020 Ltd, a declassified report released by the National Security Committee revealed. According to the report, the organisation led by David Koranyi contributed over 3 billion forints (approx 7.2 million euros) to the campaign of the Left.

Moreover, the fundraising section of the website exposed another very significant leftist lie.

Mr Marki-Zay has said on several occasions that he was only receiving donations from Hungarian passport holders, that is, from Hungarian citizens, but there is no trace of this proof on the website. No such information was required from donors.