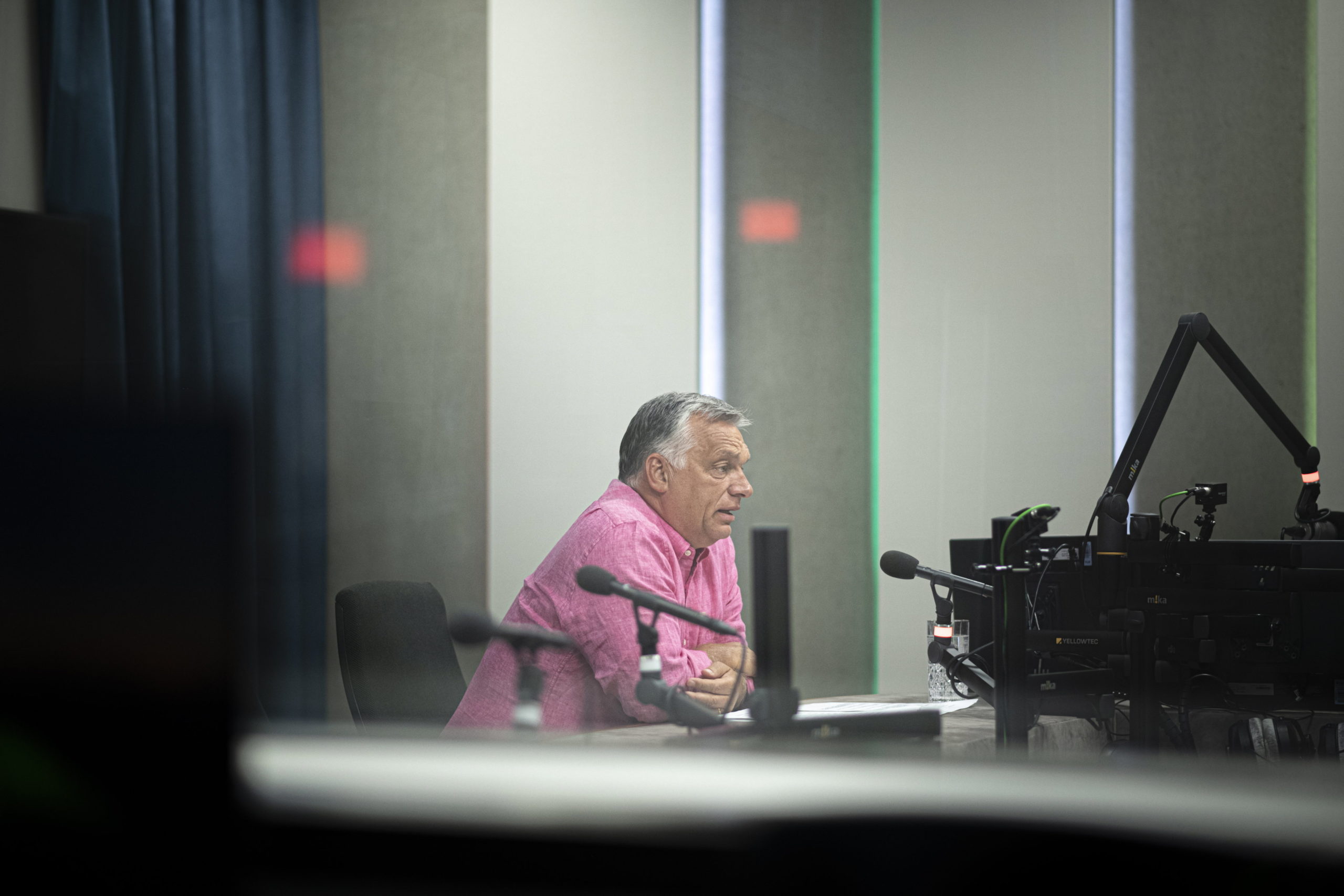 PM Orban: Take the help there instead of bringing the problem here

There are still Hungarians in Afghanistan and Hungary will also rescue those Afghans whose lives are now in danger for having cooperated in Hungarian operations there over the past 10 to15 years, the Hungarian prime minister told Hungary's public radio (MR1) Vasárnapi Újság programme Sunday morning. On the topic of a new migration crisis, Viktor Orban said that it is important to work together with other countries and to take the help there instead of bringing the problem to Europe. The premier also spoke of the coronavirus epidemic and the achievements of the Hungarian economy.

There are still Hungarians in Afghanistan

The Hungarian prime minister said there are still Hungarians in Afghanistan, including soldiers, and they must be evacuated safely. Mr Orban emphasised that they were grateful for those facing the considerable risk in taking part in the military operations.

Hungary is also evacuating those Afghans who may be in danger because they have cooperated with Hungary in the past fifteen to twenty years, he stressed.

“I think it’s fair for Hungary and also for the other NATO members that we each take care of those Afghans who cooperated with us” while we were stationed in the country and who are now facing the threat of retaliation by the new Afghan government, the premier said, adding that no one should have illusions about the safety of their families going forward.

“The right and fair thing to do is to get them out,” Mr Orban said, adding that there is a closed list, but because “we do not want to let just anyone in,” those on it must be vetted and that was not easy from such a distance.

PM Orban called this the more dangerous but easier part of the job. “The more complicated is the migration crisis,” he said, warning that mass migration is expected. He pointed out that Turkey is the one to watch in this matter. They are the closest, they have knowledge of the region, and they know exactly what the reality is and unlike the US, they are not obsessed with “exporting democracy”.

“Cooperation with the Turkish government is key,” the PM stated, adding that it is in Hungary’s interest to keep the would-be migrants who want to leave Afghanistan in the region.

“Take the help there, instead of bring the problem here,” he put it. Apart from cooperation with Turkey, Hungary must “warm up” her already close relations with the countries along the Balkan migration route “to be able to defend our country in the face of the migration crisis,” he said, noting “we have a border fence and border guards with which we can protect ourselves.” Hungary believes that migration is not a human right.

With reference to the US in the context of the situation in Afghanistan, he opined that “savvy is not a matter of the size of a country.” The US is a huge country and “one would think that that would mean a concomitant amount of savvy and information at its disposal,” but it turned out not to be the case. The operation in Afghanistan is “bleeding from a thousand wounds,” the head of government noted.

“Everything was fine” while we were attacking the hotbed of terrorist activity in and around Afghanistan, he said. The rule in NATO is that the member states defend each other. Hungary can also be in need of such help, he pointed out.

Mr Orban said the troubles began when the “hotbeds of terrorism” had already been destroyed, but the Americans thought it would be good if the entire world functioned as their society does.

“Exporting democracy” does not take into consideration any cultural-historical characteristics and almost always fails, he claimed.

Mr Orban added they are also trying to “fix” Hungary, they think they know best how to handle the migrant and gender issues.

“Democracy building” did not work in Afghanistan. But setting up an effective Afghan government which is able to defend its country after the withdrawal of US troops could have worked. US intelligence had information that the Afghan government was strong enough to maintain order for one or two years, however, the country collapsed in three days, the premier noted.

The PM also touched on the three battles Hungary is facing in Brussels. The first one involves the “gender craze”, the second the issue of migration, while the third is about who should bear the costs of environmental damage, with some wanting to tax the property and cars of families, which the Hungarian government does not support. These issues will be at the heart of the European debates in the autumn, Mr Orban said.

Only vaccines can save lives

Mr Orban said if each of us convinces one more person [to get the vaccine], the country would develop such a level of protection that would make the fourth wave of the epidemic incomparable to the previous waves.

“We can inoculate everyone as we have 8 million doses of the vaccines in our stores,” the prime minister said, emphasizing that those registering will certainly receive the jab within one week.

Although his national holiday weekend – 20 August, the “birthday” of Hungary – was a time for unbridled celebration, wthe country has to get ready for “the fourth wave (…) knocking at the door.”

“The strongest and loudest knocking will not be on our doors,” but on the doors of the neighbouring and Western European countries, but as was the case last year, Hungary will not be spared in the fourth wave either. The government has been working all summer to prepare the country for the fourth wave, with the operative boards holding regular meetings, he stressed. Mass vaccinations of children have been organised and the third round of vaccinations (boosters) has been launched. He recalled that Hungary was one of the first countries in Europe to administer two jabs to more than half of the adult population.

A sizeable amount of data is already available on how effective immunisation is. One out of five hundred vaccinated people gets infected and the course of the disease is milder than in the unvaccinated, so it is worth trusting the vaccines. Inoculation works in the battle against the virus, mask wearing and social distancing do not. As he put it,

“Only vaccines can save lives.”

The fourth wave is not a threat to the vaccinated, but to the unvaccinated, Mr Orban emphasized. He added that many unvaccinated people hope to avoid contracting the infection, but they will likely not succeed. He stressed that because the efficacy of mask-wearing has proved to be low, while that of the vaccines has been overwhelming, another big vaccination campaign will be launched starting 1 September.

The Hungarian economy is booming

The prime minister also spoke of the “booming economy”, which will allow for the payment of a premium to pensioners, the amount of which is dependent on the actual rate of economic growth reached. Viktor Orban currently sees a one-off payment of 50-56 thousand forints (approx. 155 euros) as probable, but the amount maybe much higher.

He emphasized that at no time since the democratic change of regime had so many people been in work in Hungary as there are now. People can be proud of themselves, but at the same time, the government also had a role in the favourable employment growth data, he noted. He stressed that the question is no longer what to do with the unemployed, but rather whether there will be enough workers to fill vacancies. The greatest protection for those living on wages is, if the number of jobs exceeds the number of employed, which is the case in the Hungarian economy today, he declared. He added that efforts should be made to ensure that small and medium-sized enterprises have access to credit.

PM Orban spoke of being confident that Hungary would achieve an annual economic growth of 5.5 per cent, which would enable a tax reimbursement to families with children. The incremental re-introduction of the so called “13th-month” pension will also continue, as will their goal of exempting those under 25 from paying income tax, he explained, noting, “we have quite a workload ahead of us.”

On the topic of tourism, Viktor Orban put it this way: Budapest is ‘wheezing’, ‘coughing’ , ‘hacking’ and ‘as yet, hasn’t managed to regain its old vibe’. This is through no fault of Hungarians, but because tourism in the capital was dependent primarily on foreigners who are not intent on travelling just yet. It would be beneficial if Hungarians living in the countryside got to know Budapest more thoroughly, the prime minister told MR1.

The premier believes the fireworks on 20 August [national holiday commemorating Hungary’s first Christian king St Stephen and the founding of the state], which attracted about 700,000 people, managed to “turn a market fair attraction (…) into an elevated artistic performance worthy of national pride.”